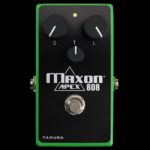 For 2020, Maxon teamed with the original designer and inventor of the Tube Screamer, Mr. Susumu Tamura, to come up with something very special. Mr. Tamura became fascinated by the variation in sounds available when he listened to different vintage original Tube Screamers. After he meticulously examined those over 100 units, he determined that indeed his favorite models all used a certain brand and model OpAmp to deliver what he felt was a superior Tube Screamer tone.

After sourcing a limited supply of these New Old Stock (NOS) chips, Mr. Tamura and Maxon got to work on what would become the Apex 808. The Maxon Apex 808 is described as a model that generates more tonal transparency, top-end clarity, and note separation. As lovers of Tube Screamers, we wanted to sit down with it and hear for ourselves what the Apex 808 could do and we also decided we could compare it with some of our own vintage and modern Tube Screamers in the collection here as well.

Housed in the familiar green box, but with a silk-screened blacked out top, the Apex 808 includes controls for Drive, Tone, and Level, and is powered by either a 9v battery or DC supply. It has a push-button stomp switch commonly used today, but is wired just like the original 808s using traditional through-hole construction of components on the PCB, rather than surface-mount components often chosen by makers today. Sonically there can be little to no difference heard in effects pedals using surface-mount, but it’s nice to keep the Apex 808 truer to the originals.

Going Head to Head with Other Screamers

We compared the Apex 808 both with an original 1980 Ibanez TS-808 with a JRC4558D OpAmp, as well as a new production reissue stock Ibanez Tube Screamer 808. Going with a clean amp approach first to listen closely to the pedals’ own overdrive characteristics, I used an American Standard Stratocaster plugged into a 1967 Fender Pro Reverb. Whether the gain was set low or high, there were a few things that I noticed right away that indicated some clear differences between each pedal.

First up was the original 1980 model with the Japan Radio Corp JRC4558D chip. This one is one of my favorite Tube Screamers. It has a really sweet voice in the overdrive that’s soft around the top end. Imagine an overdrive with the “edge” taken off. It also has the classic midrange compression that Tube Screamer users enjoy and it reacts well to finger playing dynamics.

Next up was the stock reissue Ibanez Tube Screamer 808. This has the current production JRC4558D chip and sonically while it’s still a Tube Screamer, there’s certainly a difference between it and the original 1980 unit overall. The general tone is the same, but the feel and the compression itself are different. We’ve previously written about the Ibanez 808 and learned that changing some key parts to NOS (between FETs, clipping diodes, and OpAmps, ALL contributed to a change in character and tone for this circuit). Still it was a good baseline to use comparing one new unit with the Apex 808 which is also new. I was curious to see which one the Apex 808 would sound and feel closest to.

Finally, the Apex 808. I would say it was described accurately by Maxon as it certainly does have more high-end presence with more openness and clarity to the notes. I would describe this as being the most transparent of the group. I also noted was that there was just slightly less midrange compression as well as a mild enhancement with low end notes.

The writeup wouldn’t be complete without trying these in boosting applications as well. And what better way than to use a classic Marshall with a Gibson Les Paul? When running the drive control low on each pedal but the volume up high to push an already overdriven amp, I would say that the characteristics that one hears when comparing each unit starts to diminish and becomes more subtle.

The differences described above still do exist, but let me explain why they are more subtle. If you run an EQ box for example or a Phase unit in front of a distorted (i.e. compressed) amp rather than in the effects loop (post preamp gain), the differences between those two will be dramatic. That’s because anything placed in front of the amp where the amp is already overdriven will simply become further compressed. That compression naturally reduces dynamic range and we hear it as a more subtle effect as far as any tone shaping added as well. But with a device placed within the effects loop, this is added after the preamp gain stages so there’s no compression effect and the result is a dramatic ability to have more tone shaping, or phase, etc. when something is in the loop. And the same rule applies to the tone differences with the various overdrive boxes being used as boosts in this way. What you DO get with an overdrive running as a clean boost however on the front end, regardless of the three units here, is a nice boost in distortion quality of the amp itself and the tube overdrive, and that delivers the goods for searing solo work or heavier sounds in general.

So back to the Apex 808. Overall, the Apex 808 didn’t really have quite the same feel or qualities as either of the two other units equipped with JRC4558D chips and the transparency, while subtle, was very unique for a Tube Screamer. This leads me to believe that the mystery OpAmp in the Apex 808 is not a NOS JRC4558D. Two other OpAmp chips used in the original 808 circuit are possible choices: the Malaysian Texas Instruments RC4558P and the Texas Instruments TL4558P from Japan. The Apex 808 chip won’t show an identity on its face if you go looking for one, but my ears again tell me that the chip is definitely not a JRC that I’m hearing.

So perhaps all that hype around the JRC4558D being “the chip” to have is just hype? Whatever resides inside, I really enjoyed what the Apex 808 brought to the table sonically.

In the end, what you have in the Maxon Apex 808 is certainly a limited, and unique addition to the family of screamers. At $299, it isn’t cheap, but consider the alternative hunting for a vintage unit with this sound. That’s getting into four digit costs.  So if you’re searching for the classic circuit and want the benefits of a more open transparent sound and feel, along with Mr. Tamura’s stamp of approval as having his favorite mystery OpAmp inside, the Apex 808 is what you want. And I think after my time with it, I have to seriously consider that the Apex 808 just may be among the best screamer pedals ever offered to date.

Visit maxonfx.com for more information or to buy direct.