Perhaps this is the most common question we receive here when people first inquire about the Hot Mod V2, Lynch Mod, and Mr. Scary Mod. And of course we also offer a reverse-wired version so that either model can also function in many of the reissue amps which the original Soldano Hot Mod could not. In general, although there are non-master and master volume amps listed here, note that all of our mod devices generally work better if your amp has a master volume on it.  So here is the list:

*2203 and 2204 amps (and related 2103, 2104 combos) made from 1976 until about early 1979 didn’t use shielded wire for pin 7 of the V1 tube. This wire is sensitive when added gain is put into the circuit and can cause oscillation/squeal when the preamp gain control is moved to about 6 or above. The correction, which Marshall did from the factory from around early 1979 and later, is to use shielded wire for that particular pin 7 and replace the non-shielded green wire. This is an encouraged update that should be made to the earlier amps by a professional tech so that they will operate more quietly, with or without the HMV2/Lynch Mod added to the circuit: 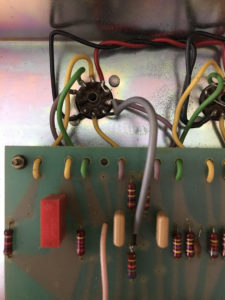 Marshall Studio*: This new series of mini 20 watt heads require the removal of the L bracket and thumbscrew so that the units can fit into the PCB-mounted socket in the amp which does not use a base tube shield.

*NOTE: Standard non-reverse wired Hot Mod V2s that have an “H” “H+” or “SC” marking on the bottom plate ARE already compatible with the following Studio series heads. If your Hot Mod V2 does NOT have these markings, email [email protected] and I can upgrade your wiring for FREE (just include $8 to cover return shipping) so that your HMV2 can be compatible with a wider range of amps including the Marshall Studio Series heads. All standard-wired Lynch Mod and 2021 HOT MOD V2 EVO models are already fully compatible with the SV/SC heads.

Order Reverse Wire Reissue (RI) version of the Hot Mod V2/Lynch Mod/Mr. Scary Mod to use with the following amps:

NOTES ON OTHER AMPS

Clones: The Hot Mod V2 has been found to work well in a variety of Marshall 1959/1987/2203/2204 clone and similar circuits including: Ceriatone, Germino, Mojotone, Wangs, and Bugera (Bugera requires a reverse wired HMV2E model and is compatible with pre-Infinium 1960 model only. Bugera Infinium 1960 will NOT work properly).  If your clone amp is based on a 2203/2204 design and has any squealing/oscillation noise when using it with the HMV2/Lynch Mod/Mr. Scary Mod, it is likely because the amp doesn’t use shielded wire on pin 7 of V1 like Marshall amps use on their 2203/2204 designs from 1979+. This would be a good update to perform on the clone amp, regardless of the use of the HMV2/Lynch Mod/Mr. Scary Mod or not as Pin 7 of V1 tends to be sensitive.

**NOTE 2: While the Runt 20 (reverse wire), JJ Jr. (reverse wire) and PT-20 (use standard wire) models are sonically compatible with the HMV2E and Lynch Mod/Mr. Scary Mod, the head enclosures are too shallow and don’t have enough depth to fit the HMV2E chassis without FIRST removing the amp chassis from the head box. So if you would like to use the HMV2E with these amps, you first need to remove the chassis bolts, slide out the chassis, install the mod, and then slide the chassis back into its head box and retighten the chassis bolts.

Orange Amps: Many Orange models do not use a traditional cathode follower type tone stack which the mod needs in order to make a connection and add its gain stage. However, the OR50 we have found is compatible. We’ll updated the list as soon as we learn about additional models.

Peavey Amps: Standard wire version of the mod is compatible with the VTM-60, VTM-120 and Butcher (original 1980s version) amps.

Sovtek Amps: The standard wire version of the mod is compatible with both the Mig 60 and Mig 100.

Other Amps: The Hot Mod V2 is designed to work with amps which use a cathode follower design into the tone stack. It adds a gain stage essentially on top of the cathode follower. As a result, the HMV2 will function in other classic amps like Fender Pro, Super, Twin, etc. as well as others like Vox AC30 or certain Traynor amps, etc. However, the circuit of the HMV2 has been tuned and optimized for Marshall circuits, so we generally recommend they be used for the models in the list above only. If we were to make a design for a Fender for example, it would be tuned differently just like it would also be tuned differently for a Vox.