When Marshall amplifiers became wildly popular on the music scene in the mid 60’s, clone and copy makers soon followed with their own versions of the famous Marshall Super Lead design. It needs to be noted that Hiwatt was NOT one of these companies. In fact, what may appear at first as a simple variation and copy on the Marshall SuperLead in what was the form of the Hiwatt Custom 100 DR103 head, further examination quickly reveals that the design itself was actually far from it.

Hiwatt amplifiers were marketed as high-end amplifiers, and indeed their quality in construction, from use of premier Partridge transformers to exquisite attention to detail being made in the electronic wiring and assembly, quickly further enhanced Hiwatt’s reputation. Even die-hard and loyal Marshall enthusiasts would have to admit that the construction quality of early Hiwatt amplifers was vastly superior to Marshalls. The person responsible for this was Hiwatt’s Chief Technician Harry Joyce, who oversaw the construction of these amplifiers and built and signed many of them himself. Harry Joyce was a military-certified wiring technician, and as a result, all Hiwatts produced during the Harry Joyce era were produced at military-spec levels. Military specifications required that products being made be wired in such a way that components would be easily accessible and that the wiring itself would remain "clean". This was to allow for quick and efficient repairs of military equipment while "in the field". Looking inside a Hiwatt chassis, this attention to "Mil-Spec" is plainly evident.

This attention to detail was also the primary reason why Hiwatt production was limited to only 40 amplifiers per month. As a result, Hiwatts are much more scarce compared to Marshalls and obviously fewer musicians know about them due to their limited availability. The most famous Hiwatt within the line was the Custom 100 DR103 amplifier. Its 100 watts of output compared to a Marshall Super Lead is quite different to say the least. The Hiwatt DR103 is notably louder and can also run much cleaner than100 watt Marshalls when needed and they also have tremendous headroom available. Playing a Hiwatt at a loud volume is well… an experience. When I played through one for the first time (a DR103 made in 1972), all of a sudden, my Marshalls felt very "thin" in tone in comparison. Hiwatts are loud, punchy, and rich with even-ordered harmonics and I should add the politically incorrect term, "ballsy as all hell!". I can think of no better example of the epitome of clean and lush tube tone. Overdrive is certainly available when the Hiwatt is pushed, but it must be acquired by use of the higher-gain "brilliant" channel (more on this momentarily) and certainly a high-output pickup helps further. The "normal" channel is voiced to stay clean and powerful at all levels. An additional benefit to the Hiwatt DR103’s tone and design was its inclusion of tone controls that actually seemed to respond with a much wider range than other amplifiers of the time. Bass response could be bassy, mids added strong punch and a wide range of the treble and presence controls would deliver all the upper frequencies and sibilants desired.

Similar to the Marshall Super Lead’s four-input design, the Hiwatt DR103 also features four inputs for both "normal" and "brilliant" channels, with preamp levels available for both. The channels can also be linked together like a Marshall, but it is important to note that the higher-output channel inputs on the Hiwatt are the ones located on the bottoms, while the lower gain inputs are on the top. This applies for both the "brilliant" and "normal" channels. This is backward from Marshall’s design. It is also important to recognize that both the Marshall Super Lead as well as the Hiwatt DR103, while both called "dual channel" designs, are not the same as today’s channel-switching amplifiers. Two independent channels were built into these amps and could be used either one at a time or both together but they could not be switched. To serious "old school" players that know "cleaning up" the signal can occur by simply altering picking attack and/or by rolling back the guitar’s volume control a bit, this isn’t considered a big issue. As a result, both Hiwatts and Marshalls that lack channel-switching are still popular and widely used today.

The Hiwatt DR103 design is also based around the use of four EL-34 power tubes and four 12AX7 preamp tubes. The transformers are set up so that the amp can be used with various line voltages around the world and speaker impedance can also be set to 4, 8, or 16 ohms with two speaker outputs wired in parallel.


Shopping for a Hiwatt DR103 today In the United States especially, Hiwatt Custom 100 DR103s can be found and bought at a tremendous value. Indeed, in Groove Tubes President Aspen Pittman’s book, "The Tube Amp Book", the Hiwatt DR103 is listed as one of the top 10 greatest amplifiers of all time. And while the Hiwatt company has changed hands several times and the amplifiers are now being produced again as reissues, original Hiwatt DR103s can be found for an average selling price of $700 as of this writing in February 2001. Not bad whatsoever for an amplifier of this caliber. There is no better value for a player seeking a hand-built, high quality amplifier using only premium parts, period.

1st important note regarding Hiwatts. Hiwatt amps produced with the high degree of attention to detail and quality were made from the late ’60s (around 1967) through the early 1980s. Sometime after founder Dave Reeves’ death, and a changing in hands of the company occurred, Hiwatt amps began using more "questionable" construction techniques. These designs are easy to identify when the chassis is exposed because circuit boards were then used and the tube sockets were also placed onto the circuit board itself rather than being mounted directly to the metal chassis. This is still commonly done with amps built today from many manufacturers, and from my perspective is a questionable technique. I say "questionable" because nobody knows what kind of longevity will be sacrificed when continuous levels of tube heat and vibration are exposed to an amp’s circuit board. For serial number and dating information to make sure you find a pre-"tubes-mounted-to-PCB board" model (this switch over occurred sometime during the middle ’80s – search out an amp no older than the early ’80s), visit the Hiwatt Story, an excellent technical reference site for Hiwatt amplifiers at www.hiwattstory.com. 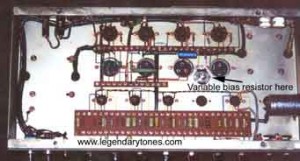 2nd important note regarding Hiwatts and their power tubes when using these amps in modern times. The Hiwatt’s bias is not adjustable and it was done this way because in the days when Hiwatts were being produced in the 1960’s and 1970’s, quality tubes such as Mullards were plentiful and the amplifier was built to work with them specifically. These days, there may not be enough bias available when using new tubes and the result (under-biasing due to the design of new tubes) will make the tubes run hot and burn out quickly. The solution is to add a variable bias resistor to the circuit or to continue to only use New Old Stock(NOS) tubes. The conversion is relatively easy to do however if the decision is made to add the variable bias resistor. See the photo above for a cleanly-done bias modification performed by Classic Amp Repair’s Evan Aurand. Many famous name players have used Hiwatts through the years. One of Hiwatt’s most famous original users was The Who’s Pete Townshend, who played crushingly-loud distorted chords at very loud Who concerts. Certainly Hiwatt can be partially to blame for his hearing loss! Other players, such as Pink Floyd’s David Gilmour, used Hiwatts for their beautiful and rich clean tones and hence also saved his hearing! Gilmour utilized various devices in front of the amp to color his overall sound. Other notable Hiwatt players and bands from the past include Tommy Bolin, Rush, the Rolling Stones, Journey, Nazareth, Fleetwood Mac, etc. (all band/player references courtesy of The Hiwatt Story online www.hiwattstory.com). Hiwatts are still being used and appreciated even today and are still the amplifiers of choice for Pink Floyd’s David Gilmour as well as being used by U2’s "The Edge" as can be seen on their most recent tour.