The old adage, "a chain is only as strong as its weakest link" can definitely be applied to the topic of speakers. Worn or mismatched speakers in wattage or impedance (ohms) are one thing, but different speaker designs also provide dramatic changes in tone and response for guitarists. And this is an area that is all too often neglected.

Guitarists can obsess about a number of modifications that they need to do to their amps or guitars (I’m certainly guilty here!), all while their old 4 x 12 cabinet sits around waiting. Ask many guitarists, "What speakers do you use?" and you may well hear a reply of, "Oh just whatever Celestions I think." Those that are more educated may be able to tell you which particular Celestion speaker model is in their cabinet, but may not fully understand the crucial significance of tone that one model can have over another.

Many of our reader questions become the basis of new articles written and this is certainly an example of one of those. We’re received questions ranging from how one particular speaker may sound versus another, as well as about how cabinets themselves impact the final tone. These topic areas can be discussed in simple terms or they can be more scientific when one chooses to dig deeper. There are also a plethora of other topic areas that we could cover in the future that go into depth about calculation of speaker and cabinet design, magnet types, cones, and how they each impact tone.

But, for the sake of this primer, lets first offer a rundown of the most well known Celestion speakers that have each contributed to make up "The British Sound" over the years.

This will be a general guide because even within each speaker type listed, there are various changes that have been made throughout its life. For example, a late ‘60s Celestion 25 watt G12M will sound different from one made in 1979 because the ingredients used in the creation of the speaker changed over time. Sometimes changes were made for reasons of durability, sometimes for cost-considerations, and other times for both reasons. Regardless of these factors, while a G12M 25 watter from these two eras for example will sound different, they still inherently contain the basic characteristic tones and voicing of a G12M. And THAT basic tone character is what this article will describe from each of the various speakers.

What we are interested in is comparing and contrasting the following Celestion speakers used in Marshalls at various times: G12M 25, G12H 30, G12-65, G12T-75, and the Vintage 30. These are the classic ceramic speakers most widely known and available. The earliest G12Ms from the mid 1960s were rated at 20 watts and later increased to 25 watts RMS power handling capacity. We’ll primarily focus on the 25 watt version as it’s the most common and plentiful. The earliest models were nicknamed "greenbacks" because of their green plastic magnet cover. Throughout the1970’s, the color of the magnet cover was changed (beige, black, etc.), but the basic ingredients, other than a few variances in the cone, largely remained the same, until the late ‘70s, circa ’78-’79, when new materials in the cone diaphragm were explored.

The tone of the G12M is the foundation for much of the greatest rock and blues music ever recorded. But what does that really mean? And what does one sound like "in real life" away from the world of recording studios that can alter, shape and compress the sound through the mixing board, e.q., and other processors?

The G12M to this writer’s ears is a speaker that changes character and color depending on its use and volume. It has smooth midrange that is focused right in the middle of the musical spectrum, perfect for guitar. It emphasizes the top end crunch of a distorted rock guitar, but rolls off many of the most extreme highs that more efficient speakers can reproduce.

The G12M compresses at volume, which means it produces a blend of low end that feels musical, interactive with the guitar, as well as loose at times. Pushing the speaker too far will result in over-compression and lack of definition. The trick is to play with the bass and volume control of the amplifier to careful find the right balance of compression. Like many amplifiers, the G12M, whether in early 20 watt or later 25-watt form has a "sweet spot" zone when pushed to moderately loud listening volume. Fortunately for those that have limitations for volume output, the input sensitivity rating (which is related to a speaker’s efficiency, i.e. how much energy it can transfer to sound) of most G12M’s, are several dB’s (average 3-4) lower than many other speakers. The end result is that it is a quieter speaker (at the same comparative output setting on an amp) than others including the G12H or Vintage 30. A few dBs in reduced sound output makes quite a difference!

The G12M-25 watt from the late ‘60s through the early ‘70s are my favorite Celestion speakers for classic hard rock and blues tones, and the Heritage series 20 watt G12M reissue is also a fantastic speaker choice for this genre. 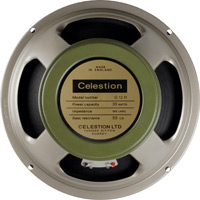 The G12H in its most commonly found form is the 30-watt cousin of the G12M. It has a heavier magnet but also sounds and feels quite different from the M. The tone of the G12H, when compared with all of the others in this listing of major Celestion speaker types, is the most neutral in terms of both tone color and response.

If I was to pick out a particular frequency set that the G12H emphasizes, I would say that it slightly emphasizes the upper mids and lower top end of the sound spectrum. When pushed at volume, the G12H stands strong and will not compress like a G12H. So in the case of a comparison when played through it using guitar, a G12M will feel like it has "more bass" at volume which is actually compression, while a G12H will feel more solid and with more accurate bass response. Some say describe the G12H as stiff at times, but this is because it doesn’t compress or bend until it is pushed hard. In truth, the G12H can reproduce more bass than the M, but it cannot create its own bass the way a G12M does at compression. That’s an important distinction between the two speakers.

The G12H30 is also an efficient speaker with a sensitivity rating of 100dB, which means that it is perceivably louder than the G12M.

There are also two versions of the H speaker in addition to various cone types. A 55 hz and 75 hz rated cone – though unless you are using extreme e.q. settings, and presuming we’re talking guitars and not basses, you’d be hard pressed to hear that much of a difference between the cone types for this particular speaker. It is subtle.

Overall, these two speaker types, the G12M and the G12H, are the ones most often compared and are both classics in their own right. They each have a long and dedicated following of loyal users that will tend to prefer one over the other. Some enjoy mixing the speakers. It is worthwhile to check out the review of the Celestion Heritage reissues that we conducted when they were released; they are both excellent models and are truer to the original vintage models made in the 1960s. If you’re a lover of the G12H, you’re not alone – Hendrix is the most famous of G12H30 users. He apparently had a problem blowing up too many G12M’s! 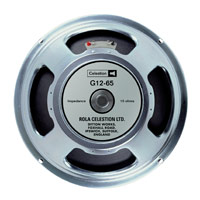 This was the forerunner to the modern common G12T-75 used in the majority of Marshall speaker cabinet produced from the mid 1980s to present time. The G12-65 made its debut in Marshall cabinets in 1979.

Sonically, it sounds somewhere between an H and an M, even though it doesn’t use the same massive magnet or cone type of an H. In design, it’s quite different using a substantially smaller magnet, but has a stiffer cone structure. The result is that the 65 has an e.q. color that I would describe as "slightly mid scooped, with extra high-end emphasis and tight, focused bottom end". It’s a bright speaker and is the first one that can easily accent the true ear-piercing frequencies that I generally dislike in some Marshalls. That said, reducing the presence and treble controls can often be an effective aid to smoothing out the tone of this speaker. That’s the first and "quickest" mod to try when using this speaker with a Marshall!

Celestion reissued the 65 as part of its Heritage Series of speakers as the model has developed an interesting following by many players. For my applications in Marshall amplifiers used for rock, it is easily my least favorite speaker in the lineup of Celestion’s offerings. It’s just a bit too gritty on the top end. This model is the most common Celestion speaker of all. What’s the tone like? This is the one that definitely moves us into a more mid-scooped zone. It has a solid bottom end at low and moderate volumes and tight highs. It has less high-frequency emphasis than the 65. The G12T-75 delivers a great rock and roll bite that is crunchy yet smooth when used with a master volume-style Marshall or higher gain contemporary amp. You can bring out some of the classic early Marshall-like flavor of the classic M speaker somewhat by increasing your mids on your amp, but it’s still sonically quite a different animal.

Essentially, this speaker excels in hard rock and metal voices, but can also be a bit buried in the mix due to its scooped midrange nature. It puts out quite a bit less spiky top end than the 65-watt model that preceded it. Make no mistake though, this speaker still has plenty of top end – always watch your treble control.

The G12T-75 does share one characteristic with the G12M in that it is not very efficient, and therefore not a very loud speaker – the H30, which is an older design is quite a bit more efficient. What this means is that if you’re in the situation where you get to really crank up your cabinet of 75s, they can also be prone to compression on the low-end. But because the speaker itself is already tuned for added low-end response, it is easy to get too much and create over compression, so watch that bass control on the amp if you’re going to crank it up. This was Celestion’s early attempt in mid 1980’s at producing a vintage-sounding speaker mixed in with higher power handling capacity. It’s not actually rated at 30 watts – Celestion "tricked us" so to speak with marketing – it’s rated at 60 watts. Marshall included these speakers in many of its cabinets as an upcharge/upgrade, with cabinets marked usually as "AV".

And the tone? Well, if the H30 model is characteristically flat in e.q. response (relatively speaking) and the G12T-75 is mid-scooped, then we can basically say that the Vintage 30 is the polar opposite of the G12T-75 and is mid-humped in its response.

What else does that mean? It is a loud, efficient speaker first and foremost. It also has a mid band of color in the tone that many either love or hate. The mid-emphasis is not like that of the G12M, but is instead placed a bit higher, at more nasal-mid frequencies.

Does that mean this is a bad speaker? Not necessarily – if your amp is starving in mid range by its natural voicing and design, getting a bit of a bump in those frequencies may really bring out the voice your guitar may need to cut through the mix – especially with lead work. Many love this speaker for just this reason. Nobody could deny that one of the speaker’s most famous users, Slash, has a fantastic lead voice tone that the Vintage 30 definitely helps bring out!

One thought on “Celestion Speakers Explored”