Throughout the late 1970s and 1980s, Boss developed a number of classic designs, and the CE-2 Chorus is arguably among the best and most famous of pedals Boss had ever produced. It was also the industry’s very first compact chorus unit (the earlier CE-1 was a larger AC-powered effect). The CE-2 was then upgraded in the mid-80s with a new cousin, the CE-3 Chorus, a model which added stereo output capability along with a fancy sparkling blue paint job. But for some reason, the CE-3 just didn’t have the same warmth in its chorus effect that the CE-2 had. In fact, for many years, both the CE-2 and CE-3 were available and sold at the same time and many players still preferred and purchased the CE-2.

During the 1990’s when the boutique pedal market began to take off, Boss was still innovating and putting out great products, but it seemed the company was becoming overshadowed by this new wave of boutique builders. Fancy paint jobs and unique names were the trend. It’s an irony and perhaps a testimony to the great designs from Boss that more than just a few of these builders would also base their own circuits on classic Boss designs. 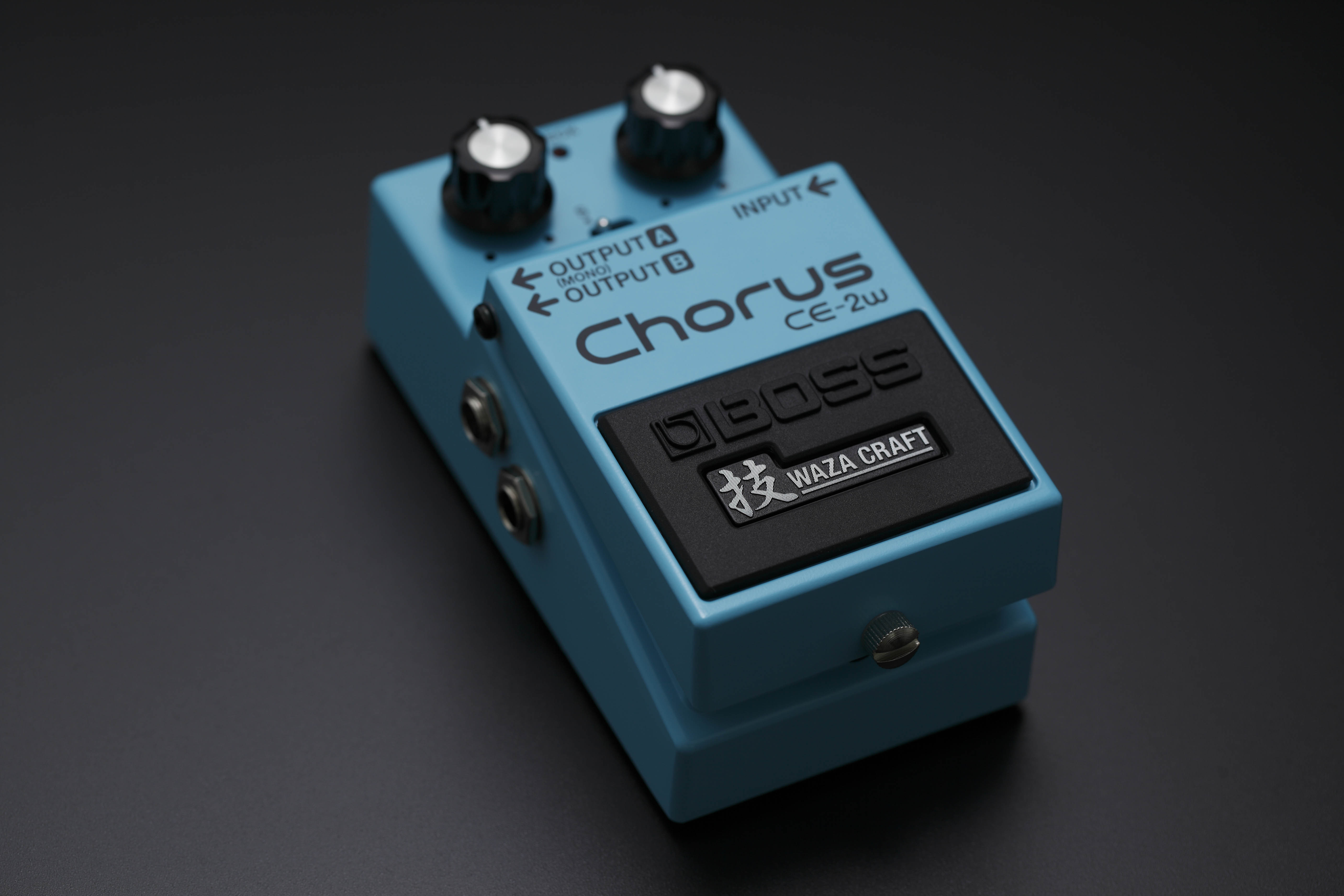 Now as we come to the tail end of 2016, Boss introduced its CE-2w chorus in its Waza Craft family. Think of the Waza Craft lineup as reissue pedals with a twist that both pay homage to some of Boss’ most classic designs, while also delivering some added functionality. Similar to how many will modify Boss circuits, perhaps this was the Boss way of showing it too can play with this crowd.

In fact, while communicating with Boss product management, it was evident that the Waza Craft line of pedals was developed very differently from its standard line. Component selection, testing, and the design process itself I was told took an average of four times longer than a typical standard Boss pedal. The CE-2w is the latest Waza Craft pedal to emerge and it indeed has some unique features. It’s designed to look like the old baby blue CE-2, has the same two Rate and Depth knobs, and even has the “silver screw” battery cover screw like the original that was created 40 years ago. But this CE-2w provides some versatile additions that perhaps may just make this the best chorus pedal Boss has developed.

How does the CE-2w sound? Fortunately I have an original silver screw CE-2 in my collection so I was able to directly compare the two. We should note that when comparing a pedal that is approximately four decades old, some of the component values will drift. Essentially this means that no two CE-2s will sound exactly the same.

With that said, when A/B’ing both the original CE-2 and the CE-2w, I must say that the the CE-2w sounds remarkable and authentic to the original. The only difference I could note is that to get the CE-2w to sonically match my CE-2 with a typical setting of Rate at 11 o’clock and Depth at 1 o’clock, the CE-2w only needed to be set just a little higher in depth to 2 o’clock to mimic the original perfectly.

What impressed me as well, was that unlike my old stereo CE-3 which contained some brittle artifacts in its chorus voice (it was certainly NOT an audio upgrade to the original CE-2), the CE-2w retains that beautiful, soft, layered chorus voice that makes the CE-2 so beloved. In short, if you love the CE-2, you will find the CE-2w just as wonderful of an effect to use.

Switching to CE-1 mode, while I didn’t have a direct vintage CE-1 model to compare it to, I’m very familiar with the circuit it is based on which is what was built into the company’s famous Roland Jazz Chorus line of amplifiers.

I confirmed with Boss product management what I had suspected, that there is a time-delay difference between the CE-2 and CE-1 modes. The CE-1 uses a shorter delay time, which sonically gives it a more spatial effect. With the depth cranked up, you get into more of the dramatic chorus effects that have a bit more movement. Think of it as on the edge of a flange effect when really turned up. The CE-1 mode packs more dramatic intensity, so this will be the mode to use when you really want to get those seasick effects going.

The last mode is CE-1 Vibrato which delivers a vibrato effect only. Unlike the original CE-1 however, the addition of both the rate and depth control being able to be applied to this mode adds even greater versatility.

The CE-2w is like owning a collection of the greatest Boss chorus hits, all available in compact form in the new Waza Craft line. At $199, with a 5-year warranty and Boss’ well-deserved reputation and quality, I have no doubt that the CE-2w will be a hit. In fact, I was so happy with the CE-2w, that it replaced my beloved CE-2 on my pedalboard which I’ve owned and loved for years. That’s saying a LOT. We truly are living in a golden age of effects and the Boss CE-2w is an example of one of the brightest effects stars out there on the market today.